i was excited to see Soulive on stage on Sunday- i hadn't gotten a chance to see what they can do onstage yet... they lived up to every expectation i might have had. "don't you dare try to label us, man, cause we're just gonna break every one of them labels down," i heard them say. well said. - all the shots i'm putting up here are from me- i sincerely apologize to the artists for my lack of photographic skills. more (professional) photos are to come -

after Soulive got off the main stage, Bob Schneider immediately walked onto the Magic Hat stage and opened with "Tarantula." the set also included "Paraplegic Blues" and an incredible tribute to James Brown during "Get On Up."

"there she goes/ there in the moonlight/ under the stars" Bob sang in the "Tarantula" reprise. it was actually sunshine and it completely erased the downpour earlier in the day. this may seem strange, but Schneider's apparel and demeanor reminded me of Robert Downey Jr. straight out of "Only You." weird? maybe. After Schneider and his band got off the stage, it was time for the much anticipated Leftover Salmon reunion. The band walked onstage with a "Howdy West Virginia " before taking the crowd through an hour-and-a-half set of the bluegrass honky tonk we missed so much in their absence.

Sam Bush came out to fiddle with the band beginning with "In a House, In a Home."

"One of my favorite musical experience was in West Virginia," Vince Herman told us as in intro to "Whispering Waters." "It's a good thing to be back here on a Sunday."

It was ironic, really, that they chose to play a song that included the lyrics "And the West Virginia Waters went Down Down Down" because it was right around then that the ominous black clouds hovering overhead decided to make their presence known. Posted by Samantha Spector at 1:13 PM 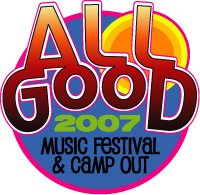